The origins of the city’s history dates back to the Middle Ages, when German crusaders conquered Latvian lands. The Rhymed Chronicle states that the Dinaburg Castle was founded in 1275 by Ernst von Ratzeburg, the Master of the Livonian Order, on a trade route on the borders of Russian and Polish lands. The castle became an important fortification site, near which a trading settlement was established.

Dinaburg Castle in the 13th century

The Dinaburg Castle was in such a vulnerable position in relation to the lands of the Principality of Polotsk and the Duchy of Lithuania that Russian and Lithuanian army forces tried to destroy it several times. The first battles at the foothill of the castle took place in 1277 when the Duke of Lithuania Troiden tried to besiege the Order Castle for a month without success.

In the 14th-15th century the Dinaburg Castle was repeatedly subjected to the attacks of the troops of the Dukes of Lithuania and Russia, it was destroyed and rebuilt again as the castle played an important strategic role. The Livonian Order did not spare resources for the fortification of the castle. In 1347, the Master of the Order Gosvin Gerik fortified it with four towers.

At the beginning of the 15th century, the Komtur of Dinaburg became one of the most influential persons of the Livonian Order. During this period, using the garrison of the Dinaburg Castle, the Livonian Order attacked Russian lands several times, threatening to Pskov and Novgorod. However, after adding them to the Principality of Moscow, the Grand Prince of Moscow Ivan III, in order to ensure safety on the western borders, began a crusade to Livonia. At the beginning of the 15th century Livonia lost its grandeur and experienced a decline. In 1481 twenty thousand large army of Ivan III took the Dinaburg Castle for a short period. Under the conditions of a peace treaty between Ivan III and the Master of Order Walter von Plettenberg, all conquered territories were returned to Livonia, which, in turn, had to pay tribute to the Principality of Moscow for 50 years. This treaty prolonged the existence of Livonia for over half of a century. Only the Livonian War (1558-1582) finally destroyed the diminishing state.

In the second half of the 16th century Livonia could not longer repulse the attack of Russian army forces and turned for help to Poland. In 1559 the Dinaburg Castle together with other fortresses was pledged to the King of Poland Sigusmund II Augustus. In 1561 the Livonian Order ceased to exist. For two centuries (1561-1772) Latgale became a Polish province – Inflanty. In 1566, after the dissolution of the Livonian Order and inclusion of the current territory of Latgale and Vidzeme into the Polish-Lithuanian Kingdom, Dinaburg became the administrative centre of the Inflanty Voivodeship and received its coat of arms.

On August 11, 1577, the army forces of Ivan the Great conquered the castle. The Dinaburg Castle and trading settlement were destroyed during the Livonian War which lasted for many years. By that time the castle, which was already 300 years old, lost its military importance.

The army of Ivan the Terrible at Dinaburg Castle in 1577.

However, the border post, where the interests of Russia and Poland crossed and which was reached by the Swedes at times, could not be left unfortified. Therefore Ivan the Terrible started to build a new fortress 19 km down the Daugava River from the old castle. The fortress built by the soldiers of the Russian Tsar on the banks of the river Šuņupe, as well as the whole Latgale, came under the control of Rzeczpospolita after the Livonian War. In 1582 the King of Poland Stefan Batory granted Dinaburg with Magdeburg rights which paved the way for further development. The placement of the Jesuit missionaries in Dinaburg brought about significant changes in the development of the city, becoming the centre of the Christian mission of Latgale.

After the Truce of Altmark, Dinaburg was appointed as the administrative centre of Latgale. In 1647, with the decision of the Sejm of Poland, Dinaburg became a place for reloading grains and other goods. The city’s economy developed, it was managed by a king-appointed magistrate and four councillors.

During this time, Rzeczpospolita, Russia and Sweden were fighting for the Baltic lands. In 1600 and 1655 the new Dinaburg Fortress and the city was conquered by the Swedes.

In 1656, the battle near the Daugava River took place between Russia and Sweden. On the day of Saint Boris and Gleb, the Russians occupied Dinaburg, and the Tsar Alexey Mihailovich renamed the city to Borisoglebsk. The rebuilding of the fortress began, the Boris and Gleb wooden church was built, and the inhabitants returned to the city, but very soon, in 1667, Dinaburg was returned to Rzeczpospolita and became the administrative centre of Latgale and the place of residence of bishops. As a result of the Jesuit activities, a cathedral and a Catholic clergy school was established and the Polish nobility moved to the city.

The beginning of the 18th century brought new challenges for the city. The Great Northern War (1700 – 1721) brought significant changes in the Baltic political map. The war started in 1700 with failure attack of Saxon army forces, allies of Russia, on Riga. During this time Saxon army was settled in Dinaburg. The consequences of war were terrible: misery, impoverishment, diseases and epidemics to the locals. In 1710 there was a plague on the territory of Latgale and the city suffered a lot from it. Almost whole garrison of Dinaburg died, the fortress was disarmed, and cannons were taken to Vilnius. At this time the decline of the fortress and the town began.

In 1722 after the First Partition of Poland, Dinaburg was joined to Russia and it became the district city of Polotsk province. Later it was incorporated into Vitebsk province.

The most significant changes in the economic life of Dinaburg were brought by the construction of a railway in 1860. The railway line between Petersburg and Warsaw connected Dinaburg with Petersburg, but in 1862 with

Warsaw, and in 1861 the railway linked Riga and Dinaburg. In 1893, with the Order of the Russian Emperor Alexander III, Dinaburg was renamed to Dvinsk.

At the end of the 19th century and the beginning of the 20th century, Dvinsk became the largest industrial and cultural centre of the northwest part of Russia. In 1913, there were 112,848 people living in the city (more than in Minsk).

During the First world War Dvinsk became the front city, the 5th Russian army headquarter was located there. The city was greatly damaged during the warfare, the population declined sharply, many industries were transferred. From February to December 1918, the German army was dislocated in Dvinsk, then the city was occupied by the Bolsheviks.

On January 3, 1920, the city was released from Bolsheviks with the help of united forces of Latvia, Lithuania and Poland and it gained its current name – Daugavpils.

During the Republic of Latvia, the city’s economy and cultural life flourished. Several nationalities lived in Daugavpils: 34% were Latvians, 25% - Jews, 18% - Poles, 18% - Russians, 3% - Belarusians. There were 602 mostly small industrial enterprises in the city.

In the 1920s the Teachers’ Institute, the Latgale People’s Conservatory, and the Crafts School “Saule” was established.

In 1935 the Unity Bridge connected the banks of the Daugava River, but in 1937 a monumental and multifunctional building – Unity House, where a theatre, a concert hall, a library, a typography, a swimming pool and other institutions were located, was built in

the centre of the city.

In June 1940 the Republic of Latvia was incorporated into the USSR, but in 1941 Soviet occupation was replaced by Hitler occupation. Germans established Jewish ghetto and the camp for Russian war prisoners Shtalag-340 in the fortress. More than 165 thousand people were killed on the territory of the city during the war and more than 70% of the buildings were destroyed. On July 27, 1944 the Red Army came into the city.

In the post-war years, the construction of large factories developed in Daugavpils. The factories of locomotive repair, driving chains, electronic tools, etc. were built, including the largest chemical industry company in Latvia - Daugavpils Chemical Fibre Plant. Since 1946 the city has a tram.

In 1956, previously independent city of Griva was joined to Daugavpils.

The history of Daugavpils determines also the present of the city. The geographical location of the city is still the most significant development factor. Daugavpils is a large railway junction, which promotes industrial development as well. Several large metal processing companies operate in Daugavpils, and food and light industry is developed. The medium and small business sector is actively working. Thanks to Daugavpils University, the theatre, which was restored in 1988, as well as the activities of various cultural and national societies, Daugavpils has become an important centre of culture and education in Latgale. 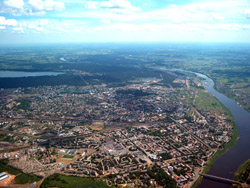 Daugavpils is the second largest city in Latvia, which has big projects for the future and great achievements today.