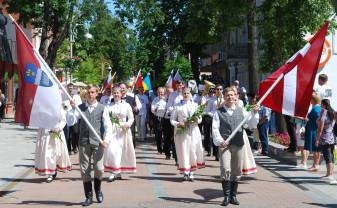 For the first time in Daugavpils, a detailed development program of cultural sector has been developed and approved at the City Council meeting of May 13, which envisages dynamic interdisciplinary and international cooperation over the next seven years, involvement of various social groups in creating cultural offer and implementing environmentally friendly actions in organizing events.

In preparation for the title of European Capital of Culture 2027, in close cooperation with representatives of Daugavpils cultural organizations, a serious audit of the city's existing cultural resources and events has been carried out, the cultural needs of the population and directions for growth have been identified.

Daugavpils cultural heritage sites, diverse cultural offer – festivals and events – have a great potential for growth to make the city an internationally popular cultural tourism destination in Eastern Europe. In the last decade, Daugavpils has made serious investments in the development of the symbol of Daugavpils – the fortress. Along with the internationally acknowledged Daugavpils Mark Rothko Art Centre, active local creative communities operate in the territory of the fortress, creating both living history and contemporary culture offer in an authentic environment. The Martinson House and the new Museum of Technology and Industrial Design will soon be opened in the territory of the fortress.

Creative co-working spaces are being created in the Saules Street quarter. The creation of the exhibition Smart Table in the House of Traditions at the Unity House will be started in accordance with the developed content and design concept, which will allow to get familiar with the traditional culture through modern technologies. A technical project for the construction of the Oskars Stroks Summer Concert Hall and the expansion of the Daugavpils Regional Studies and Art Museum is under development, and the renovation of the Stropi open-air stage for large-scale events is also planned. The city has a wide range of cultural education opportunities and many different creative initiatives are developing. This dynamic development allows Daugavpils to call itself not only an industrial and educational centre, but also a creative city of culture, worthy of receiving the title of European Capital of Culture 2027.

Jānis Dukšinskis, the head of the working group of the Daugavpils Culture Development Program, states that the Culture Development Program is based on the study of the needs of the population, and local cultural institutions, societies and active creative people have been actively involved in its development. Early this year, an extensive population survey, focus groups and interviews with cultural workers were organized, the results of which are reflected in a study published in March. Around 200 participants took part in various co-working events and virtual workshops of ideas. “Together we created a vision to develop Daugavpils into a dynamic cultural city of national and European significance, where there is support for creative freedom and where we take care for cultural heritage. The primary task is to make every effort to create a sense of belonging to the city and, of course, to polish the international image of Daugavpils. In the program, we have reflected the vision of our residents about Daugavpils in 2027 and we have planned appropriate actions for the implementation of this vision,” believes Jānis Dukšinskis.

Diāna Soldāne, the coordinator of the working group, emphasizes that the principles of good modern culture management accepted in European cities have been taken into account during the development of the program, taking care of inclusive and sustainable cultural development and thinking about opportunities for participation of various groups. The Culture Department wants to create a cooperation platform for all creative people of Daugavpils, providing support for professional growth and international relations, raising the overall quality of the cultural offer.

The Daugavpils Culture Development Program for 2021-2027 and its short summary are available on the Culture section of the Daugavpils City Council website.

The development of the Culture Development Program in January-April 2021 was carried out by the think tank “Culturelab”, the Latvian Academy of Culture and the Visionary Culture Foundation in cooperation with the Culture Department of Daugavpils City Council.