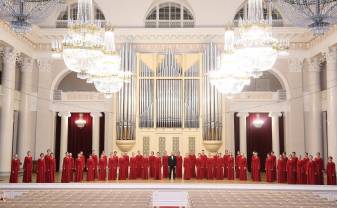 The performance of the contestants was evaluated by eight vocal music experts - chairmen of the jury: Leonardo Sagliocca from Italy and Inessa Bodyako from Belarus and members of the jury: Edgars Znutins and Jelena Borele from Latvia, Marcin Tomczak from Poland, Sergey Savenko from Ukraine, Inna Shorohova and Larisa Yaruckaya from Russia.

As admirers of Christmas music did not have the opportunity to enjoy musical performances in person, the organizers of the competition provided an alternative - from January 7, anyone interested could watch the best performances of the contestants on the Youtube channel "Latvian Contests".

The jury evaluated the performance of each participant based on the criteria included in the regulations and after several days of intensive work, the members of the jury have determined the winners of the competition.

Winners of the competition in the group of choirs / ensembles / duets:

Winners of the competition in the group of soloists:

The choir leaders and pedagogues, as well as the best concertmasters received diplomas for high professional mastery:

The jury members appreciated the participants' musical performances and their professional level, as well as provided positive feedback on the content of the competition.

The III International Contest for Young Singers of Christmas Songs was organized by Daugavpils City Council Department of Culture in cooperation with Daugavpils Unity House.

Artistic director of the contest, author of the project