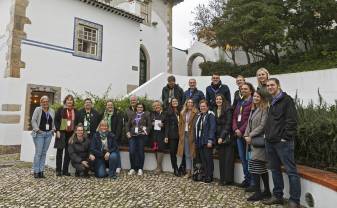 Daugavpils City Council in cooperation with Imola municipality in Italy (lead partner) implements the project Art4Rights - When a space becomes a place - Participatory public art “Network for Citizens’ participation in preserving and valorizing EU fundamental rights through participatory public art” within the framework of European Union Programme CERV.
The project involves 9 partners from 8 countries – Italy, Croatia, Portugal, Finland, Germany, Ireland, Sweden and Latvia. The main objective of the Art4Rights is to increase the sense of ownership and mutual understanding about European rights among citizens through the active participation and the revitalization of the symbols of the cities, as well as to promote international co-operation among EU countries and to promote the recognition of Daugavpils in the EU context.

Within the framework of the present project the meeting was held this November in Amadora, Portugal, where Daugavpils City Council participated as well. One of the main activities of the project is to give a “second life” to a forgotten cultural place in the city and revive it attracting the attention of the residents by implementing a participatory public art campaign. As part of the event, examples of participatory public art actions in the cities of international partners were presented, as well as Stakeholders groups of the project created by each partner. The participants of the event had an opportunity to learn about the approach implemented by the municipality of Amadora in working with different population groups, involving them in the implementation of art actions. In the meeting there were both -international participants and local residents. In Daugavpils, within the framework of this project, it is planned to organize an art activity in cooperation with the city's youth next year.

More about the project:

Division for Investments and International Cooperation of Development Department