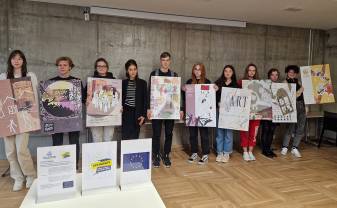 The implementation of EU financed international project “Art4Rights” has started. One of the main activities of the project is to give a “second life” to a forgotten cultural place in the city of Daugavpils and revive it attracting the attention of the residents by implementing a participatory public art campaign. We invite all those interested - both NGOs and citizens to get involved and send their ideas by October 21, 2022 to the e-mail attistiba@daugavpils.lv - where in Daugavpils and what kind of public art action could be implemented within the project.

Already two Stakeholders meetings have been held within the project. Meeting was joined by representatives from Daugavpils city municipality Development Department, Department of Urban Planning and Construction, Culture Department, Daugavpils Mark Rothko Art Centre, Latgale Central Library, Daugavpils Regional Studies and Art Museum, Daugavpils Design and Art Secondary School “Saules Skola”, as well as from Culture Department of Augšdaugava district municipality. Together the ideas to implement within Art4Rights project where discussed. Thank you to the students from “Saules skola” who presented their ideas for The Creative Quarter during the second Stakeholders meeting.

Daugavpils City Council in cooperation with Imola municipality in Italy (lead partner) implements project Art4Rights - When a space becomes a place - Participatory public art “Network for Citizens’ participation in preserving and valorizing EU fundamental rights through participatory public art” within the framework of European Union Programme CERV. The project involves 9 partners from 8 countries – Italy, Croatia, Portugal, Finland, Germany, Ireland, Sweden and Latvia. The main objective of the Art4Rights is to increase the sense of ownership and mutual understanding about European rights among citizens through the active participation and the revitalization of the symbols of the cities, as well as to promote international co-operation among EU countries and to promote the recognition of Daugavpils in the EU context.

More about the project:

Division for Inverstments and International Cooperation of Development Department