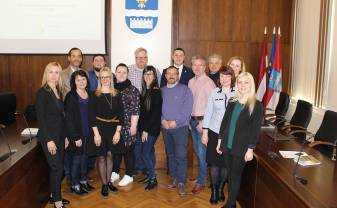 Daugavpils City Council in cooperation with Vanersborg municipality (Vänersborgs kommun) in Sweden (lead partner) implements project WIR within the framework of  European Union Programme “Europe for Citizens”, 2nd activity “Democratic engagement and civic participation”. The project involves 10 partners from 7 countries – Sweden, Italy, Spain, Austria, Germany, Finland and Latvia. Specific goal of the project is to understand the policies and strategy developed by the EU and the welcoming and integrating procedures implemented in the different member states, in order to eliminate stereotypes and misguided narratives about refugees.

From March 26th to 28th 2019 project’s evaluation meeting was held in Daugavpils. 8 participants from Sweden, Italy, Germany and Finland were hosted. During this event activities carried out before were discussed, most important information from conferences organized was summarized and more detailed information about immigrant and refugees situation in Latvia was given.

Delegation was welcomed in Daugavpils City Council and had an opportunity to visit the Detained Aliens and Asylum Seekers Accommodation Center of Daugavpils Board and to listen to the presentation done by representative from association “LATVIAN RED CROSS” social mentor Rustams Šukurovs who talked about Latvian Red Cross support for asylum seekers and refugees.