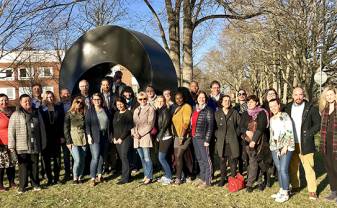 Daugavpils City Council in cooperation with Vanersborg municipality (Vänersborgs kommun) in Sweden (lead partner) implements project WIR within the framework of  European Union Programme “Europe for Citizens”, 2nd activity “Democratic engagement and civic participation”. The project involves 10 partners from 7 countries – Sweden, Italy, Austria, Germany, Finland and Latvia. The goal of the project is to promote international cooperation among EU countries, as well as to contribute to citizens' understanding of the EU, its history and diversity and the EU's aim - namely to promote peace, the values of the EU and the well-being of its peoples, by making contacts and discussions. Specific goal of the project is to understand the policies and strategy developed by the EU and the welcoming and integrating procedures implemented in the different member states, in order to eliminate stereotypes and misguided narratives about refugees.

From April 17th till 20th of conference was held within the framework of the present project in Vanersborg, Sweden, where Daugavpils City Council participated as well. There were both -international participants and local residents. Civic participation, cooperation and integration of immigrants is topical for all countries and cities that participate in the project – every partner presented situation in their country. Project partners had an opportunity to become acquainted with the experience of integration processes in these countries, especially in Sweden. There were discussions and workshops about different methods of approach when working with people with different social and ethnic background. During the international meeting future activities were discussed for successful implementation of the project.