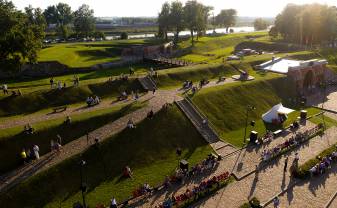 Daugavpils City Municipality Tourism Development and Information Agency has compiled the information about the number of visits to the tourist attractions, culture, sports and leisure institutions in Daugavpils in 2019. The data reveals that Daugavpils continues to develop as an interesting and diverse tourist destination which is annually visited by thousands of tourists from Latvia and abroad.

In 2019, 22,777 information requests were registered in Daugavpils Tourist Information Centre, which is by 27% more compared to last year.  Foreign travellers (26%) and travellers from other cities and regions of Latvia, incl. Daugavpils residents (74%) used the services provided by the centre. Requests for tourism information were received from representatives of 49 countries but mostly from tourists from Lithuania (42% of the total number of requests from foreign travellers), Russia (14%), Germany (9%), Belarus (5%), Denmark (3%), Poland (3%), Estonia (3%) ), Turkey (3%), Netherlands (2%), and other countries.

The visits of foreign journalists, travel bloggers and representatives of travel agencies to Daugavpils were organised in 2019. Information about Daugavpils was spread in Latvian, Lithuanian and Estonian Tourist Information Centres, international tourism exhibitions and various international events in more than 18 different countries. What’s more, an important event took place in the tourism industry of Daugavpils - the 2nd International Tourism Matchmaking Event “Daugavpils – take your time, have a rest and enjoy” that was attended by representatives of more than 50 travel agencies from 6 countries.