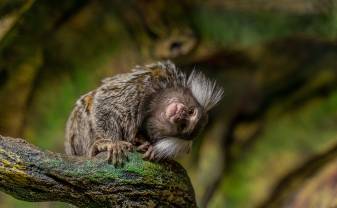 Spring has come to Latgale Zoo in Daugavpils. Grass is starting to grow and flowers bloom in the courtyard. Tree frogs are singing in the Zoo exposition. Meerkats and dwarf rabbits are sunbathing in the spring sun; also, other inhabitants feel the arrival of the warm weather.

This year the spring is different because due to the emergency situation restrictions, Latgale Zoo is closed for visitors until May 12. The employees of the Zoo use this time usefully – they repair terrariums, improve and renew artificial plants, and carry out research works. One of the main tasks of Latgale Zoo is ecological education, monitoring of natural amphibians, research and conservation of rare Latvian species.

Amphibians have woken up from hibernation much earlier this year. Within the framework of the Natura 2000 programme, amphibians are monitored in the wild. The 62 turtles bred in the Zoo currently live in Silene Nature Park. It was found this spring during inspections that turtles are well settled in the territory of the park. Latgale Zoo has become the leader in the conservation of European pond turtles in Latvia and has supplemented the water bodies around Daugavpils with fire-bellied toads and European pond turtles.

One of the largest projects of the Zoo is the creation of the Bog Trail, which is part of the Latgale Zoo territory. The trail will be located in a bog – in the centre of Daugavpils. It will be the only bog of its kind in Europe.  Along the landscaped trail, you will have the opportunity to go for walks and feel like a naturalist, choosing an adventure route. Colonies of gulls (bird species) live in the territory of the bog, which adapt to the rhythm of city life with their behaviour. At the end of the second stage of the project, the next Bog Trail development works will be planned.

Spring is very active for the inhabitants of Latgale Zoo, this year, two Egyptian fruit bats have been born in the zoo, Vietnamese bullfrogs have 184 tadpoles, the crocodile female will soon have the opportunity to meet a male of her own species, the Senegal bush baby couple are expecting to become parents. The diversity of the Zoo amphibians has been supplemented this year by 20 white African clewed frogs, for South Asian water scorpions and giant water bugs brought from Japan, mating season has begun. An otter girl will soon be brought from Spain so that the otter boy living in the new terrarium of the Zoo has some company.

Scientists of Latgale Zoo together with Daugavpils University actively participate in the international Latvian-Ukrainian project on the origin of Chinese sleeper in Eastern European nature. Scientists are conducting research about the effects of parasites on amphibian development, as well as publishing articles and writing textbooks.

Latgale Zoo is one of the most popular tourist attractions in Daugavpils. In 2019, the Zoo had more than 50 thousand visits from both Latvia and abroad.

Senior Expert in the Field of Tourism of the Daugavpils City Municipality Tourism Development and Information Agency.