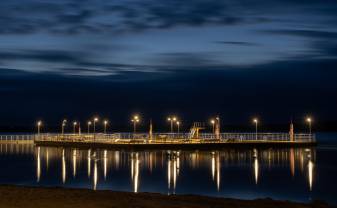 On September 21, the results of the competition-show “The Best Building of 2020 in Latvia” were announced live on the Internet. Among the winners are also three objects submitted by Daugavpils: Stropu promenade, two-level overpass on Smiltenes Street and the new section of tramline 18. Novembra Street - Stropi.

The promenade and beach area in Jaunie Stropi were ranked third place in the nomination “Landscape”, while the two-level overpass on Smiltenes Street and a new tramline in the section from 18. Novembra Street to Stropi village won recognition in the nomination “Engineering”.

Along with the prizes, all the winners received the yearbook “The Best Building of 2020 in Latvia”, which contains information and pictures of all the objects submitted for the 2020 competition-show, as well as the best works of the young artists' competition.

The video of announcing the results will be available on the website of the Latvian Association of Civil Engineers (LBS) blbs.lv with the initial live link: https://buvinzenierusavieniba.lv/gada-labaka-buve-latvija-2020-rezultatu-pazinosana/.

Photos of the best buildings of the year  are available here.