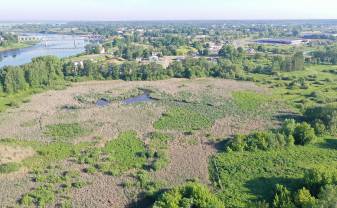 The Esplanade Wetland, located in the central part of Daugavpils, has been selected as one of the target areas of the project. The hydrological regime of the Esplanade wetland area before the construction of the Daugavpils dam in 1830-1841 was determined by seasonal fluctuations in the water level of the Daugava River and its tributary, the Šuņupe River.  The Esplanade Wetland has historically supported a biodiversity characteristic of river floodplain complexes. The course of the Šuņupe River and its connection to the Šuņezers Lake have been preserved, but the natural hydrological regime of the site has changed significantly over the course of urban development. Urban development has both altered the natural channel of the river and disrupted its course. Today, a fragmented riverscape has developed, which in its current state is no longer visually perceptible as a historically natural riverscape. However, despite significant environmental changes, the site has retained its historically natural character, which should be preserved in the future not only in the context of the Esplanade wetland, but also in the context of the whole Šuņupe River landscape.

The biodiversity of the Esplanade Wetland is an essential prerequisite for the wetland area to provide the planned environmental educational functions in the future, however, when planning the development of the area in the long term, it is necessary to take into account that unconsidered development of new infrastructure may negatively affect the natural values found in the area. In order to mitigate the potential negative impact of the construction and operation of the infrastructure planned for the Esplanade Wetland, the team of experts involved in the implementation of Urb-Area project No.LLI-472 developed recommendations for the future development of the Esplanade Wetland, respecting both the intentions of the Daugavpils City Municipality to create an environmental education facility in the area, and offering specific solutions for the conservation and enhancement of biodiversity.

By improving the area, it will also become attractive to local residents as a recreational place - for walking, socialising, active lifestyle, as well as an attractive area for visitors. The Esplanade Wetland can also be used in the future as a natural platform for the Latgale Zoo and Daugavpils Innovation Centre.

Program is funded by European Regional Development Fund (ERDF). The total ERDF funding for the Program for project funding is EUR 69 600 000.

The contents are the sole responsibility of Daugavpils City Municipality and can under no circumstances be regarded as reflecting the position of the European Union.

Head of development of the management plan