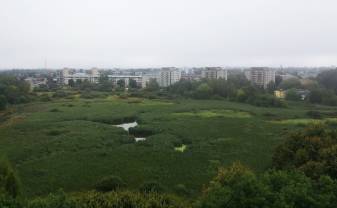 Daugavpils City Council in cooperation with the Municipal Administration of the Anykščiai Region in 2020 launched a joint Interreg V-A Latvia-Lithuania 2014-2020 ( @LatviaLithuaniaProgramme ) project "Joint Management of Urban Wetland Areas in border region Latvia-Lithuania" (LLI-471/Urb-Area). The aim of the project is to develop a new and effective approach to joint cross-border management of urban wetlands.

During the project large-scale measures to restore the green infrastructure of two urban wetlands (Esplanade Wetland in Daugavpils and Green Pond in Anīkščiai) were implemented. The implementation of the management measures involved nature and environmental experts from Latvia and Lithuania, the project working group, as well as specialists from the municipalities of Daugavpils and Anykščiai, whose daily work is related to urban spatial planning.

In the Esplanade Wetland in Daugavpils shoots of trees and shrubs have been mowed, shrubs have been thinned and a system of open water areas and ponds has been created. The primary objective of the management measures was to improve the quality of the habitats of the specially protected and rare species occurring in the Esplanade Wetland. Taking into account the urban location of the site and the high potential of the wetland periphery to develop as a recreational area, the potential impact of the management measures on the landscape was also taken into account when planning the thinning of the shrub vegetation, therefore the most scenic groups of trees and shrubs were retained during the implementation of the management measures. Invasive tree and shrub species were primarily removed to reduce their spread in the Esplanade Wetland. The areas cleared of shrubs have increased the areas of open water and shoreline used by birds for resting and feeding, and have had a positive impact on the areas of suitable nesting slopes. The mosaic location of maintained trees and shrubs along the S edge of the site reduces the impact of human disturbance. 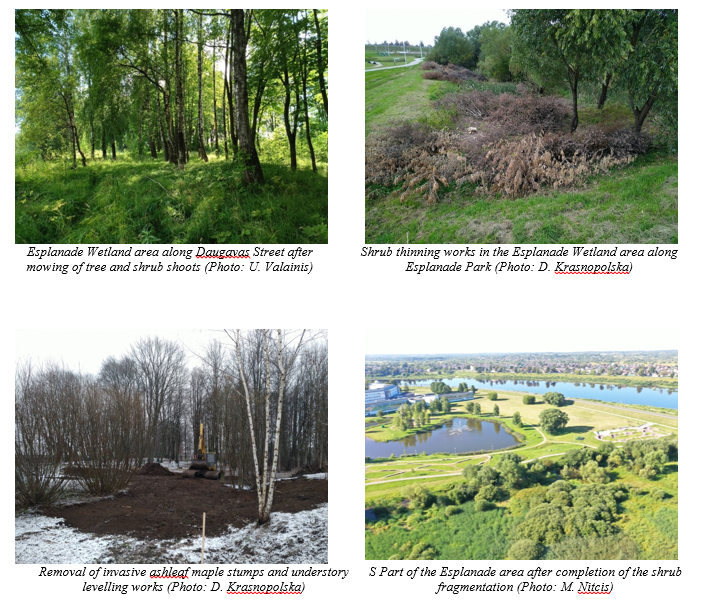 In the framework of the project several ponds and canals were excavated in the Esplanade wetland, resulting in a significant increase in open water areas used by birds as resting and supplementary feeding areas. Already in the first season after the implementation of the management measures, the open water areas and the coastline are becoming inhabited by plant and animal species that were previously absent from the area. In the long term, the importance of these sites will only increase as underwater vegetation develops in the open water areas. In line with the recommendations of the experts, Daugavpils Municipality plans to continue the restoration of the green infrastructure of the area within the framework of other projects by implementing Phase 2 of the management measures, digging additional ponds and canals that will form a closed water ring, thus reducing the impact of surrounding disturbances on species occurring in the wetland, as well as increasing the open water areas to reduce transpiration of water from the wetland.

The contents are the sole responsibility of Daugavpils City Municipality and can under no circumstances be regarded as reflecting the position of the European Union.