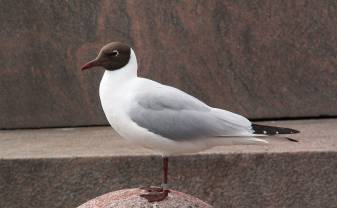 Daugavpils City Council in cooperation with the Municipal Administration of the Anykščiai Region in 2020 launched a joint Interreg V-A Latvia-Lithuania Cross-border Cooperation Programme project "Joint Management of Urban Wetland Areas in border region Latvia-Lithuania". The aim of the project is to develop a new and effective approach to joint management of urban wetlands across the border

The project includes a detailed study of the natural values of the Esplanade Wetland in Daugavpils and the Green Pond in Anykščiai. Both wetlands are important habitats for several rare and threatened species in Europe. The most important asset of the Esplanade wetland is the black-headed gull colony, where between 1000 and 2000 pairs of black-headed gulls nest each year. The Esplanade Wetland is also considered an important breeding site for other protected bird species, such as the bluethroats, whose population size in Latvia is estimated to be only 150-300 breeding pairs. The Esplanade Wetland is also characterised by an unusually high diversity of amphibians - 7-8 species of amphibians can be observed in this wetland. The area is also an important feeding ground for bat species inhabiting Daugavpils Fortress.

The inventory of nature values assesses the factors negatively affecting the habitats of the two wetlands, and provides recommendations for future management of the wetland areas. The developed Daugavpils and Anykščiai Urban Wetland Management Plan was presented at the project partners' round table discussion "Presentation of the Daugavpils and Anykščiai Joint Action Plan for Urban Wetland Management. Practical application of the recommendations", which took place in a remote format on 10 and 11 November 2021.

Based on the recommendations of the nature experts involved in the project implementation, the implementation of the management measures foreseen in the Daugavpils and Anykščiai Urban Wetlands Management Plan has already started. Thinning of shrub vegetation in the Esplanade wetland area is already underway, and the first ponds in the planned pond system have been created, which will eventually separate the central part of the wetland from the rest of the wetland area