Active tourist season in Daugavpils is over City news 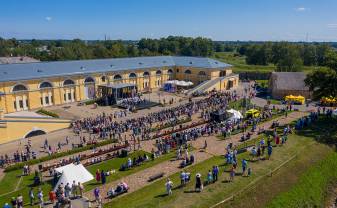 The active tourist season, the time when Daugavpils was visited by the largest number of guests, and tourist services and activities were in a greatest demand is over. According to information compiled by the Daugavpils Tourist Information Centre (Daugavpils TIC) in 2019, the active tourist season can be considered as successful, as the summer was quite dynamic and the number of visitors increased. The total flow of visitors to Daugavpils tourist attractions, culture and recreational establishments increased compared with the previous year. Daugavpils was visited by 344 378 visitors from May, 1st to September, 30th, which is 21% more than in the same period of 2018.

Geographically, the majority of visitors to Daugavpils were residents of Latvia. The highest number of foreign visitors was registered from Lithuania or 5% of the total flow. Daugavpils was visited by the travellers from Russia, Poland, Germany, Great Britain, Belarus, Estonia, Netherlands, Sweden, Norway and other countries.

Families with children, cyclists, nature lovers and travellers who are interested in culture or history visited Daugavpils. The city was visited by individual travellers, groups of students, and groups of tourists whose trips were organised by Latvian or foreign travel agencies.

14,029 information requests were registered in Daugavpils TIC in active tourist season. The number of visitors increased by 19%. The highest number of visitors was registered during the summer months, due to the favourable weather conditions for travelling, as well as significant events that were held in Daugavpils, for example, Daugavpils City Festival, Museum Night, Historical Re-enactment Festival "Dinaburg 1812", Rigas Street Festival and other.

Based on registered data, 22% of Daugavpils TIC visitors were foreign travellers. Most of the foreign tourists came from Lithuania, Russia and Germany. Tourists from Denmark, Belarus, Poland, USA, Estonia and other countries also visited Daugavpils TIC in 2019.

The main range of questions that were asked at the centre: information about tourist attractions and services in Daugavpils, Daugavpils District and the whole Latgale region, information leaflets and tourist maps.  Visitors were curious about the unique and interesting objects to visit. Besides, the demand for active leisure activities and information about the bicycle routes and boat trips was greater than before.

It was found that Daugavpils Mark Rothko Art Centre was the most visited tourist object this season. The number of visitors to the centre was 64,475, which is 9% more than in 2018. The number of visitors to the Daugavpils Fortress Culture and Information Centre and the 1st Coastal Lunette rose by 3% this season and was 52,108. The places such as “Atmiņu lāde” Exposition of Historic Costumes, “Baltais Zirgs” Art Gallery, “Vintāža” Salon of Vintage Furniture and Interior also attracted great number of visitors (37,353 people). Latgale Zoo was one of the most popular places for families and it was visited by 33,056 visitors. The other objects such as Daugavpils Local Science and History Museum, Shmakovka Museum, Daugavpils Lead Shot Factory, Family Digital Activity Hub of Latgale Central Library also attracted a large number of travellers.

Although the active tourism season is over, everyone is invited to visit Daugavpils city in other seasons. This city has so much to offer, with something for everyone. The city has a wide choice of interesting tourist objects, historical places, monuments, great number of places to eat and to stay, as well as plenty of events and festivals going on.

Everyone is invited to follow the information about the upcoming events and updates on Daugavpils TIC official website - www.visitdaugavpils.lv and social networking sites - www.facebook.com/Daugavpils.Travel, http://www.twitter.com/daugavpilstic, www.instagram.com/daugavpils.travel/.

Please be informed that Daugavpils Tourist Information Centre (22a Rīgas Street) is open from 10am to 6pm on Mondays -Saturdays from October, 1st to April 30th.