Daugavpils' potential in the fields of business and education, multinational society and geographical location, as well as its special role in promoting East-West cooperation is a precondition for the growth of Daugavpils as a multicultural, multiethnic and multifunctional city, cross-border economic development and service center. The significance of Daugavpils goes beyond the borders of the region and the country, giving Daugavpils the role of a crossroads of transit directions of international significance. (Sustainable Development Strategy of Latvia until 2030)

Dimension “Economic growth and accessibility” of the CITY VISION 2030

The territory is the propulsion of the Latgale region, industrial, job, trade, educational and science, health, tourism, sports, cultural and art center. Daugavpils is a driving force for the economic development of the Eastern Baltic, promoting the economic growth of the region together with Augšdaugava municipality, which is an important functional area of the city and a strong rural area.

The area in the future is characterized by an integrated cooperation area with modern industrial, logistics and scientific areas, secure border, competitive economy, developed education, culture and sports life, qualitative living environment both in the city and in the countryside, attractive natural and cultural recreation, business greening and digitalization.

Citizens have unrestricted access to various modes of transport, of which public transport plays an important role. Alternatives for sustainable mobility have been gradually developed - pedestrian traffic, cycling and electromobility, for which appropriate infrastructure is being developed. The area has developed environmentally friendly and integrated mobility, which is easily and quickly accessible at the regional and international level.

Daugavpils is an important business logistics and tourism center in Eastern Europe, with a high level of mobility at the regional, national and transnational levels.

Main advantages of the city of Daugavpils 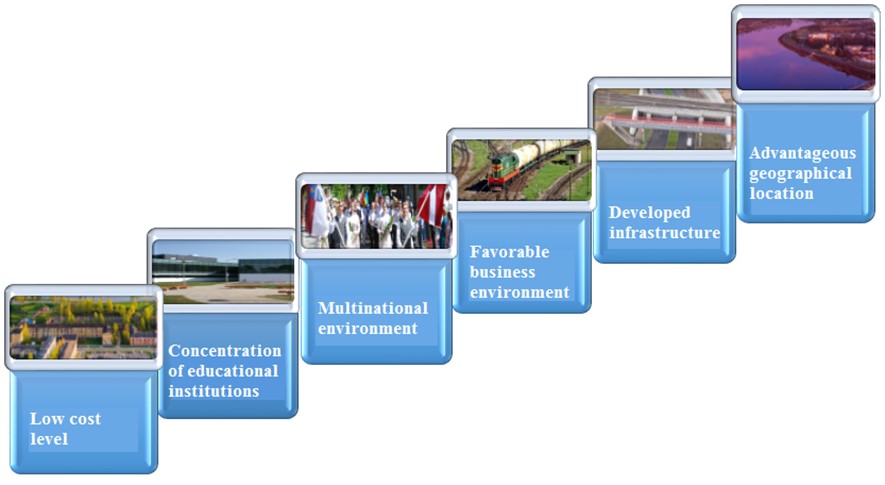 The structure of the manufacturing industry in Daugavpils in 2021, % 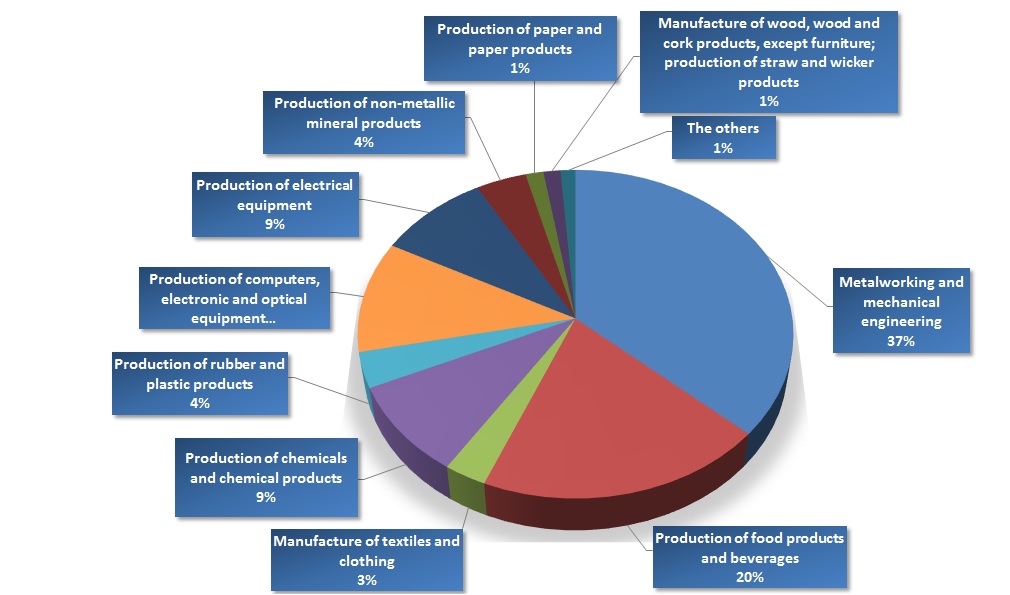 The slowdown in growth was driven by both internal factors (EU funds' investments peaked, developments in the financial sector, etc.) and external factors (review of global trade relations, Brexit, etc.). The Covid-19 pandemic also had a significant impact on the global, Latvian and urban economies.

In the 12 months of 2021, the increase of production volume in Daugavpils was achieved in the spheres of production of the chemical fibre and its goods, mechanical engineering, manufacture of concrete products for construction purposes, as well as manufacture of wearing apparel and food products.

The leading manufacturing companies of the city managed to maintain stable positions, e.g. Axon Cable LTD, "MAGISTR" LTD (+4%), "LATVIJAS MAIZNIEKS" JSC (+5,2%), "DITTON DRIVING CHAIN FACTORY" JSC (+14,5%), "NEXIS FIBERS" LTD (+21,8%), "RITAL D" LTD (+28,3%). The largest increase in production was achieved by "ZIEGLERA MAŠĪNBŪVE" LTD (+ 53%), which is due to an increase in the volume of orders, as well as an increase in the sales prices of products, thus increasing the number of employees in the company.

According to the data at the disposal of Daugavpils City Municipality, the total amount of construction and assembly works in the largest construction commercial companies of Daugavpils amounted to about 39 million euros. More than 2,000 people are employed in the construction industry in the city. Production volumes in other sectors have remained at the level of the previous year.

Metalworking, food, chemical fibre and optical-fibre cable manufacturing companies operate in the traditional sectors of the city's economy and mainly export their products abroad, these companies employ the majority of the city's population.

In the last years, new trends have emerged in the field of Information Technology (IT), companies engaged in computer programming, software testing services and development of testing products have started operating in the city. In total, 56 companies are already actively operating in the sphere of computer programming (the number of companies has increased by 30% in five years), 23 – in the provision of other information technology and computer services, 23 – in data processing, maintenance and related activities, 15 – in information services not elsewhere classified.

According to the Lursoft database, 162 companies represent the field of information and communications technologies (ICT) and telecommunications industries (compared to 2020, the growth of the amount of companies is 4%). Positive results are expected in the ICT field, as the sector is one of those whose development is being facilitated and accelerated by the Covid-19 crisis.

Manufacturing companies in the city of Daugavpils successfully operate and develop in a planned manner, expanding and reconstructing manufacturing facilities, introducing modern technologies, expanding the volumes of products sold both in Latvia and abroad.

According to the Lursoft database, 217 new enterprises were registered in Daugavpils in 2021. 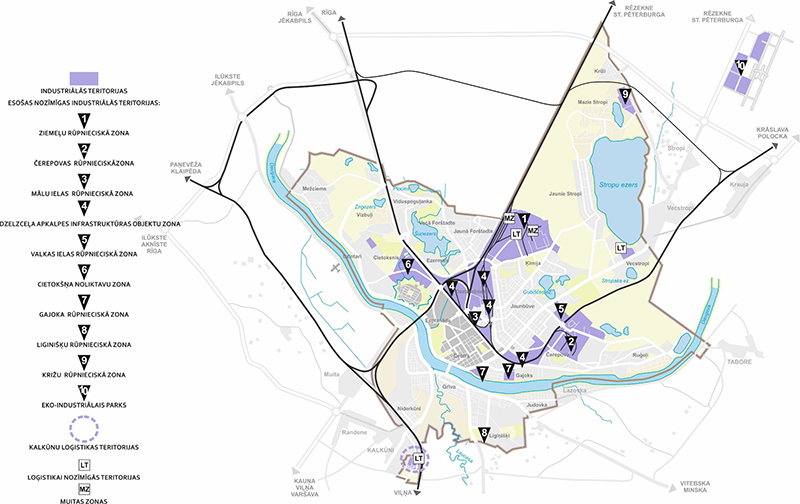 Infrastructure renovation projects for industrial areas in 2021 were ongoing and finished in order to improve the infrastructure of industrial zones in the city and to create new jobs in various industrial zones of the city in the future. The total amount of implemented infrastructure improvement projects within industrial zones in the last year reached about 19,4 million euros. SAO 5.6.2. project “Development of public infrastructure in Daugavpils city Northern industrial area Round III” continued. After its implementation in 2022 6,08 ha brownfield territory will be revitalized and 9 new jobs will be created, attracting private investments in the amount of 165 806,00 EUR. Also in 2021 SAO 5.6.2. project “Promoting the regeneration and improving the accessibility of the industrial fortress storage area” continued. Implementing projects within the framework of ERDF financing and in accordance with the provisions of the Specific Aid Objective (SAO) 5.6.2 and SAO 3.3.1, which provide for investments of economic operators in their fixed assets and creation of new jobs, a total of around 900 new jobs already are or will be created in the period from 2016 to 2023.

Since 2014, the grant program “Impulss” of Daugavpils City Municipality has been implemented to support young entrepreneurs. A total of 251 business ideas have been submitted and 84 companies operating in various manufacturing and service sectors – mainly tourism, healthcare, cleaning, repair and entertainment services, electronics, IT services, etc. – have been supported. The total amount of the grant during this time reached around 447 thousand euros, various new products and services were created in Daugavpils.

The Latgale Special Economic Zone (LSEZ) operates in the territory of the city of Daugavpils with an area of 2500 ha of manufacturing areas where the city's manufacturing companies can apply for support in the form of direct tax relief. There were already 11 (eleven) companies registered in Daugavpils operating in LSEZ in 2021.