DAUGAVPILS GETS READY FOR CITY FESTIVAL 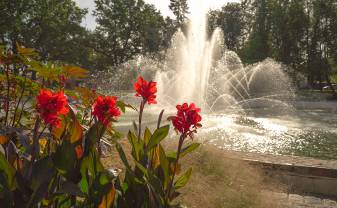 From June 15 to 20, Daugavpils will celebrate the City Festival with the motto “My Castle – Daugavpils”. Residents and guests of the city will have the opportunity to participate and enjoy various festive activities, observing epidemiological safety requirements.

The city of Daugavpils celebrates its 746th birthday and this year is also marked by several significant anniversaries related to the transport industry. Historically, Daugavpils is located at the crossroads of important roads, therefore transport and road infrastructure have always played an important role in the development of the city. The Daugava River was an important waterway in earlier periods of history. In the 19th century, the city was crossed by the Emperor's Post Road and this period was marked by the development of the railways. Even today, Daugavpils is a place where roads, cultures and languages converge. Emphasizing the diverse cultural environment of the city, which unites the people who live here, with the motto "Common language: search, create, speak" ("Lingua Franca"), Daugavpils participates in the competition for the title of the European Capital of Culture 2027. The cultural offer of this year's City Festival is one of the important stages of this process.

The online Daugavpils Family Sports Festival will take place from June 15 to 20.

On June 15 and 16, the wind orchestra "Daugava" will perform in various districts of the city. On June 18, 19, and 20, Daugavpils Regional Studies and Art Museum invites to celebrate the 746th birthday by visiting the museum's expositions free of charge. On June 19 and 20, city residents and guests will use the city's public transport for free.

On June 18, at 8.00 pm, the sky above the city will be adorned with hot air balloons. From 7.00 pm until midnight, everyone will be able to enjoy romantic mood and walk accompanied by music in Dubrovin Park, but from 7.00 pm to 10.00 pm musical atmosphere will fill Andreja Pumpura Square and Vienības (Unity) Square. A special surprise awaits residents and guests of Daugavpils: from 11.00 pm until midnight there will be the installation of Musical Fountains. At the same time, everyone will be able to enjoy the glowing of hot air balloons.

The morning of June 19 will begin with a morning flight of hot air balloons after 5.00 am. From noon to 8.00 pm there will be a Festive Fair on Rīgas Street and outdoor cafes. The evening flight of hot air balloons will start at 8.00 pm. From 6.00 pm everyone will be able to enjoy musical atmosphere in Unity Square and Andreja Pumpura Square. From 7.00 pm until midnight – Musical evening in Dubrovin Park, during which from 7.00 pm to 10.00 pm special atmosphere will be complemented by photo and video installations, live sculpture Golden Harlequin, members of Daugavpils Fortress Club of Historical Reconstruction "Dinaburg 1812", as well as dancers of sport dance club "Daugavpils" and Tabore Public Centre in splendid 19th and 20th century costumes. At the culmination of the evening from 11.00 pm until midnight at Daugavpils University, everyone will have the opportunity to enjoy the installation of Musical Fountains and the Hot Air Balloon Burner Show.

The morning of June 20 will also start with the morning flight of hot air balloons. The musical atmosphere will continue to reign in the city. At 11.30 am there will be a festive raising of the Fortress flag, opening of the Nicholas Gate and a midday cannon shot. At noon there will be parachuting demonstrations.

Starting from June 15, video greetings will be published on the city of Daugavpils Facebook.com page, but on the virtual stands of Rīgas Street – virtual postcards created by the city residents.