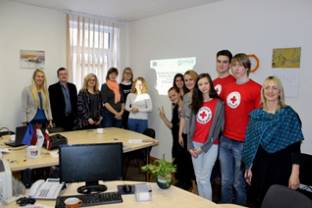 Daugavpils City Council continues the organization of local work group’s meetings within the project „Enchancing  volunteering actions and quality in Europe” (EVOLAQ) The project is implemented by Daugavpils City Council together with Norrkopping municipality in Sweden (lead partner). The Project is implemented within the Programme “Europe for Citizens”, 2nd  activity “Democratic engagement and civic participation”. The second project local work group meeting was held on 20th of April, in Development Department of Daugavpils City Council. During the meeting the main theme was the need of the development of common voluntary database of Daugavpils volunteers.

In 2016 “The Law of Volunteering” entered into a force in Latvia. It determines the order in which volunteering is organized and Latvian

authorities have both - the opportunity and the need to consider and approve the relevant regulations on volunteer work in the local government. Daugavpils volunteering audience is primarily young people. In order to support both the interests of young people, as well as the involvement of other residents of the city, within the statute of the need to create volunteer engagement and motivation system and the formal level and in collaboration with non-governmental organizations and the State Employment Agency. The goal of the project schedules to introduce volunteers with the way volunteer work with various groups of people, such as children, disabled people, seniors, foreigners etc., in other countries and to promote the use pf the experience of other countries in local government.

During the work group its representatives shared their experiences of the people, to whom the volunteering helped to find themselves and their way of life, broke stereotypes, discovered talents, provided an opportunity to meet new people and contributed to the further cooperation. The work

The first project local work group meeting was held on the 30th of March, in Development Department of Daugavpils City Council in order to identify volunteering in Daugavpils. Working Group representatives shared their stories about their experiences in voluntary work, future plans and further project tasks and ideas was discussed.

Next local work group meeting is planned in June.