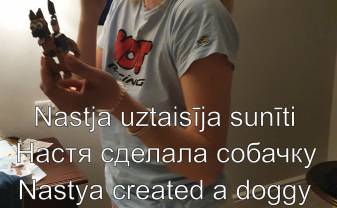 At 3 p.m. on Tuesday 21 December, a new site-specific art project, “what can’t we just create” by Kristaps Ancāns, will be opened on 2 Nikolaja Street, Daugavpils Fortress.

Latvian-British artist Kristaps Ancāns works across multiple media, integrating sculpture, painting, photography, text, and installation. He studied painting and environmental art at the Art Academy of Latvia and holds an MFA from Central Saint Martins, London, having graduated with distinction in 2016. He has received the Cecil Lewis Sculpture Scholarship and the Helen Scott Lidgett Award in addition to having been nominated for the Clifford Chance Sculpture Prize, the Arts Foundation Fellowship, UK, and several other awards.

In “what can’t we just create” (2021–2022) – Ancāns’ first large-scale project in Daugavpils – his practice has grown both formally and conceptually. The project combines monumental banners with site-specific sculpture: texts in black font on a white background (written in Latvian, Russian and English), colour photography, and a lone palm tree sculpture. Located on and around a disused building that once housed former air pilots and war machinery, the piece addresses the city and population of Daugavpils directly – its histories of perpetual war-readiness and traumas from national self-determination, including those who still live among the vestiges of the past, in an area that’s developing quickly. Ancāns’ project in the former military fortress refers to constructions and confluences of language and context mechanisms inherited by and inherent of the site that is actively transforming into a vibrant cultural hub and administrative centre for the region.

“The written word still is one of the main triggers for our imagination in a time when digital image culture suggests the game of comparison and creation of narrative through it. The potential of imagining is always present. I hope that we are not the hostages of the structures we built and unconsciously trapping ourselves in flat worlds where only one dimension is acknowledged,” remarks Ancāns.

“Altogether, the artist’s project visualises the nexus of identity, language and geography – from integration to otherness, verbal to nonverbal, corporeal to immaterial, tone to shade. At this time in history, they offer a glimpse of the shape, complexity and “colour” of the context and affect they surround. Such witty ambiguities are key to the artist’s repertoire; transforming the site into a ludic realm of self-conscious laughter, viewers can only reflect on the realities that are portrayed, contributing to their own sense of questioning, discomfort and awe. Ancāns juxtaposes seemingly dissimilar elements that both surprise and humour our expectations and beliefs in identities and heritage. And we laugh nervously, recognising that we – collectively – face these difficult and complicated questions together,” observes project curator Corina L. Apostol.

The art project “what can’t we just create”, combining monumental banners that include both trilingual text (Latvian, Russian and English) in black letters on white background and colour photography, as well as a site-specific sculpture will be opened at 3 p.m. on Tuesday, 21 December, 2 Nikolaja Street, Daugavpils Fortress. The event will be attended by the artist Kristaps Ancāns and the project curator, PhD Corina L. Apostol.